Palawan in the Philippines was voted the best island in the world by Conde Nast Traveler's Readers' Choice Awards for 2014 (whatever that is) and El Nido, a northern beach town, is all the hype. I tried it for ten days, and while it is a beautiful place it was too busy for me, with tricycles, massage parlors and people constantly wanting your money one way or the other. So I ended up in Port Barton instead. For three months. Here's why.

I like small places. It's more basic, less people, more authentic. In Port Barton, you immediately feel welcomed and the locals show an interest in you, not just your wallet. After being here for a week the first time, half the village greeted me by name when passing in the street. It's just a nice feeling and makes you feel part of the community.

People don't bother you. During high season you will only find the two guys from Roxas who's trying to sell plastic pearl jewelry on the beach and there's also a few boatmen asking if you want to go island hopping, but overall it's not nearly as aggressive as in El Nido. While the beach front is filled up with resorts, most people in Port Barton still have normal occupations. You meet farmers, shop owners, the school kids and rooster breeders. And the hairdresser, Gael. 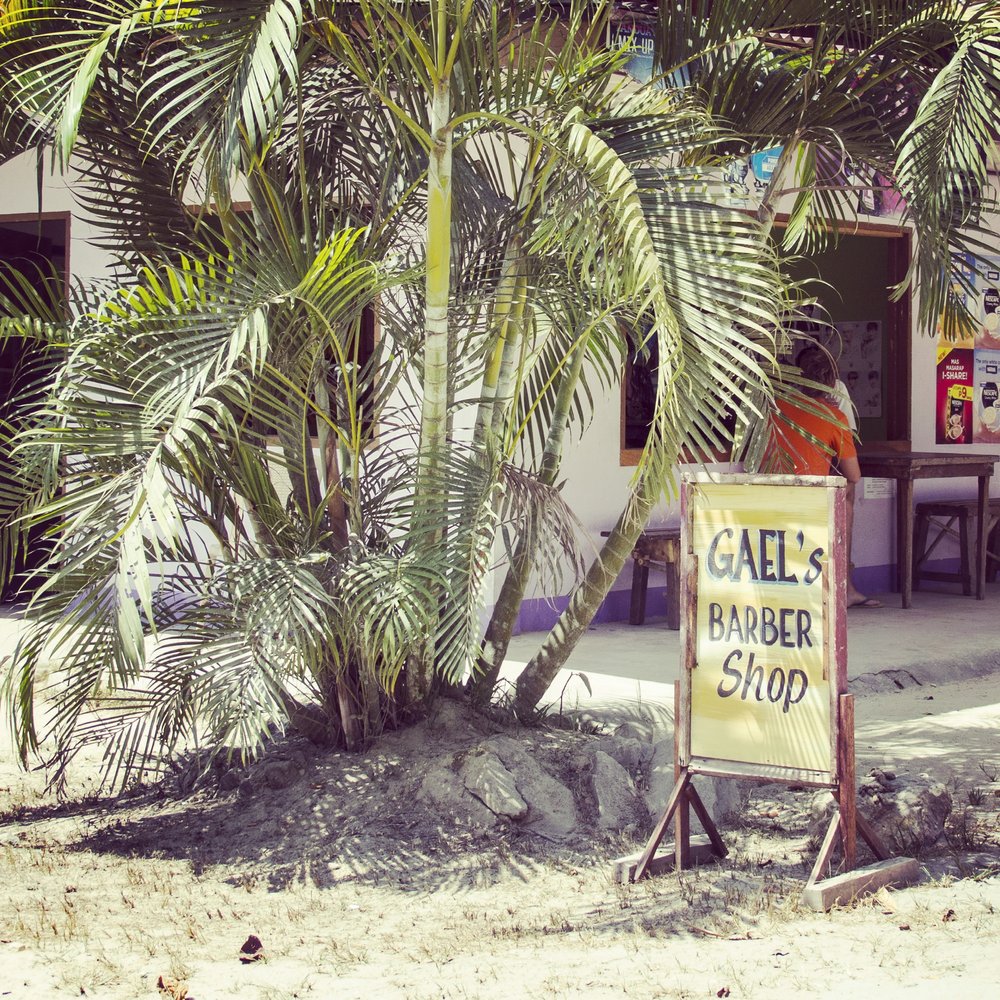 Gael's, the only hairdresser in the village

The island hopping in Port Barton is more enjoyable, for several reasons. First of all, it's not as crowded as in El Nido. We counted eleven big bancas (the Filipino boat type) on the same beach when we had lunch but here the most I've seen was three smaller ones. Also, the price is half of what you pay in El Nido. The biggest reason for me though is the sad fact that the corals at the sites around El Nido are almost completely dead while in Port Barton it's still beautiful to watch and full of vivid colors.

There's about three tricycles in Port Barton and they're mostly used to transport fruit and construction material. You have some motorcycles as well, the daily bus to and from Puerto Princesa, the jeepney coming from Roxas and a couple of vans transporting tourists. Oh, and of course the occasional water buffalo cart.

I've seen a couple of travelers coming here for the party and leaving very disappointed. You can hang out in one of the resorts having a beer or sit in front of a shop together with some fishermen drinking rum and coke, but don't expect nightclubs or full moon parties (they have tried that, but no one showed up. With the exception of a few fishermen, drinking rum and coke). There is one karaoke bar called 7170 which is an interesting experience. Try it!

The food is a bit more basic and usually cheaper. While most of the resorts have their own dining areas, I would recommend trying one of the local places, Gacayan or Paella. Gacayan is wildly popular with the backpackers because of the quantity of food you get and the prices. For example, you can get a chicken or vegetarian burger for about 80 pesos. And in these places you have the chance to meet locals as well.

Port Barton only has electricity for six hours per day. This alone probably scares quite a few away from the place (especially those spoiled digital nomads who are used to Chiang Mai and other places like that), but while it can be challenging from time to time when you need to work, I find it inspiring. Go exploring during the day and enjoy the nature instead of sitting in front of the computer or the phone! Also, the resorts all use mobile wifi routers through the 3G network and these connections are limited to less than 1GB per day, which means that they are useless after 9 in the morning after everyone is done getting their morning Facebook fix. So get yourself a simcard and load it with a data promotion if you're dependent on having internet. 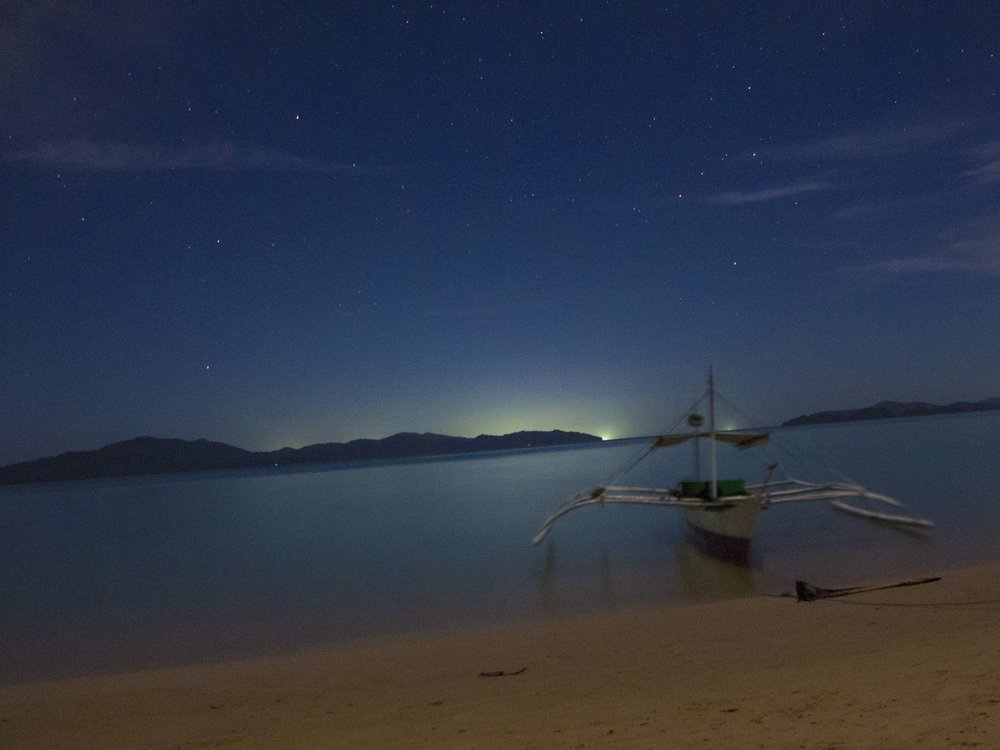 After midnight, natural light is the only light

Lastly, getting here is not as easy as going to El Nido. There are tons of buses going to El Nido but only one bus per day heading for Port Barton so you have to either catch that morning bus or pay double the price for joining a private van with excruciating air conditioning.

There's much more to tell about Port Barton, especially after being here for so long. But I'll save those stories and more tips about the place for another post. For now, you'll only get a sunset picture. 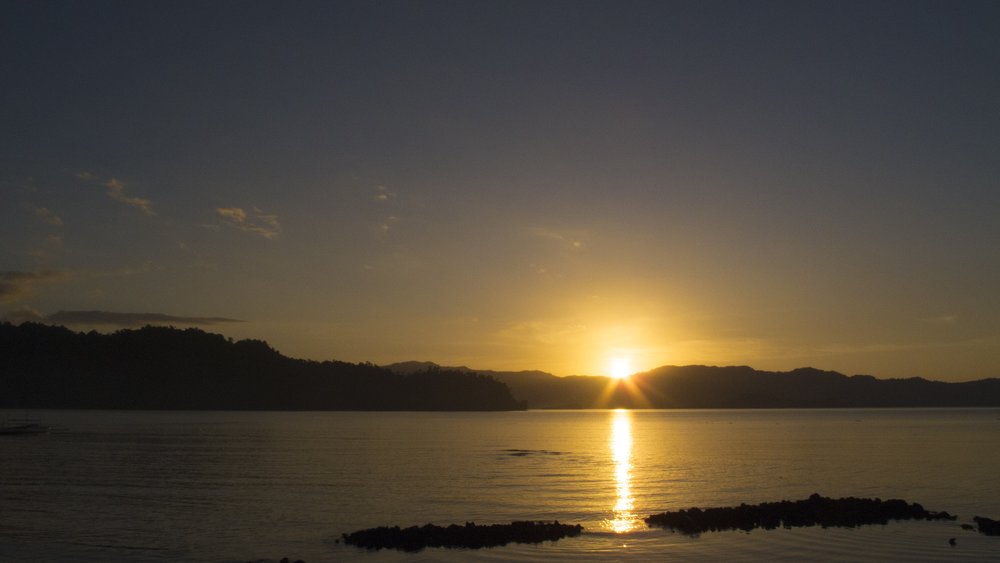 Have you been to Port Barton and/or El Nido? What did you think? Could any of these places be a good spot for you for a longer period of time? Tell me in the comments!