I was desperate of getting away from tuk tuks, sleazy bars, people, constant noise, drunk backpackers and everything fast moving. So I did what I usually do in these situations; I went to an island.

Now, I just want to clear up the confusion straight away, because I met a few people who went to the wrong place. There are two islands named Koh Rong in Cambodia. You have the big, famous Koh Rong and south of that there's a smaller island called Koh Rong Samloem. And at first I was set on going to the bigger one.

I read about Koh Rong being the number one paradise island in Cambodia, a must-see-before-you-die kind of place. Beautiful landscape, serene beaches and all that. But a few days before, I changed my mind. It seems that my fellow travel bloggers have a way of prettify everything, only writing about the good stuff. While traveling around in Cambodia, I talked to quite a few locals and expats, and everyone said the same thing: Don't go to Koh Rong! Remember me mentioning Kuta in Bali? It's a little bit like that. 24 hour full-on party (including excessive drug use, violence and an over-representation of rape incidents), over-developed, ignorant backpackers and heavily polluted waters (like in swimming in your own shit kind of polluted). Well, that didn't sound like my kind of paradise so I kept on looking. Cambodia doesn't have the plethora of islands to offer like its neighbour Thailand, but I finally found Koh Rong Samloem. And I'm glad I did. 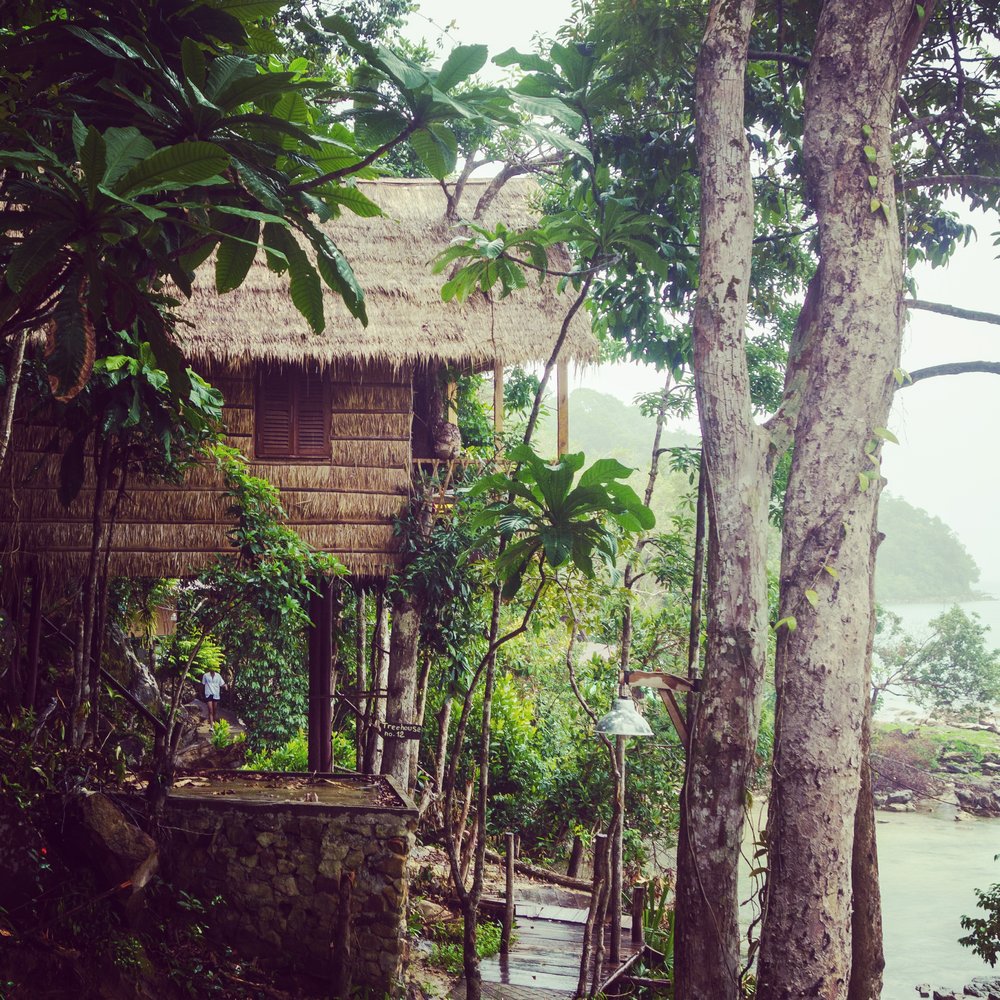 Living close to the jungle in Koh Rong Samloem

Koh Rong Samloem is a very basic place. There is no main electricity so every resort is powered by their own diesel or gasoline generator. There are no shops, no ATMs (remember to bring enough cash) and no roads, which means no land based transportation. You don't have internet, except for a few places that might or might not have some spotty and slow wifi. No hot water. If you are ok with this, keep reading.

Compared to Koh Rong, Koh Rong Samloem is a fairly new tourist destination. The first resort was built in 2012 and before that the island only consisted of a fishing village in the northern M'Pai Bay. Now there's over 20 resorts and the development is heavy. Keep in mind that the bigger Koh Rong started out as an organized tourist destination as late as in 2008 and is now, well, let's just say that people are starting to look elsewhere and I'm pretty sure that Koh Rong Samloem will meet the same fate, sooner rather than later. 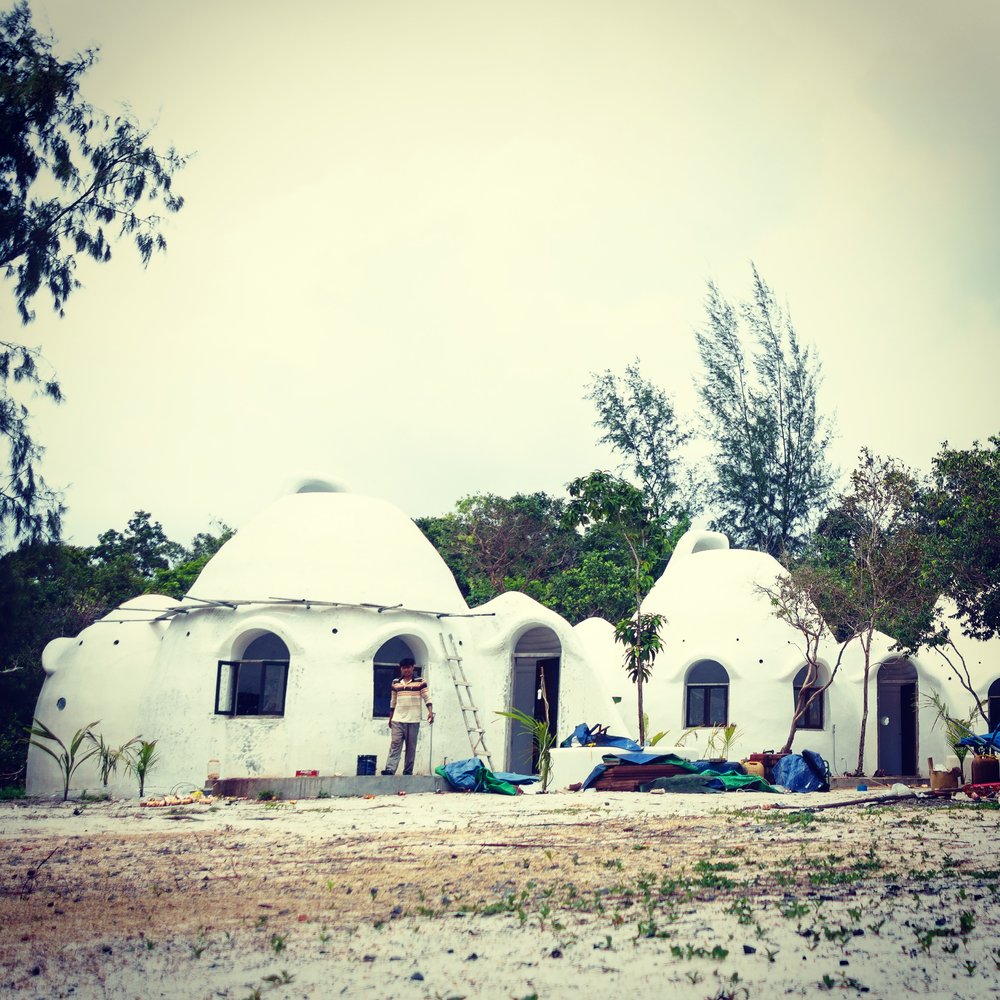 They're building a smurf resort in Koh Rong Samloem

What to do and see

Anyway, in terms of entertainment, there's little to do right now. Most people come to the island spending a night or two, even only doing a day trip, then go back to civilization. Which is not a bad thing. Being a bit slow, I was here for a week without being bored at all. Here's what I did.

Koh Rong Samloem has beaches on both east and west side of the island. On the east side you have Saracen Bay with a mostly clean beach covered with crystal white sand and shallow waters. And on the west side, there's a more golden yellow sand. Saracen Bay is calm while the other side is quite windy and rough, so naturally most people stay in Saracen Bay. 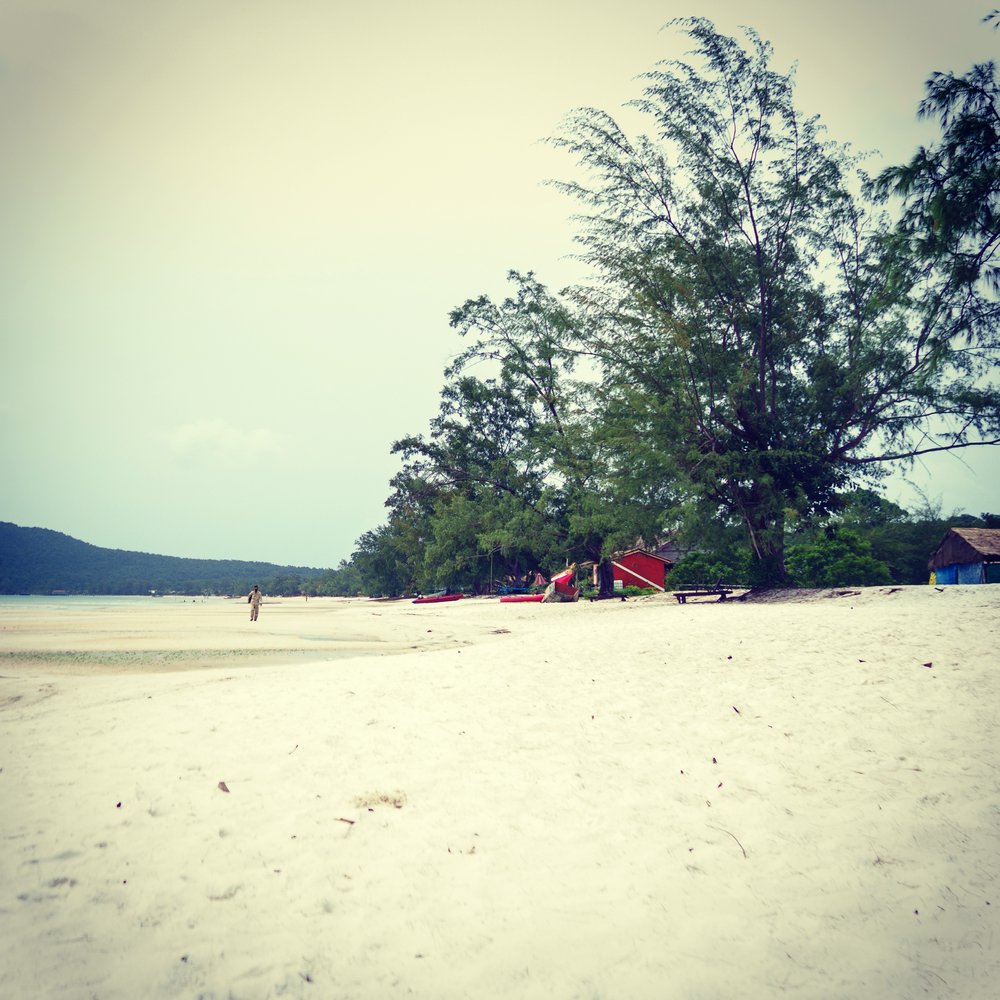 I spent most of my time walking around. The jungle is a nice alternative from hanging out on the beach, with the peacefulness and wildlife including curious macaques and colorful birds with their singing and chirping. Koh Rong Samloem has a few nice paths that you can explore. For example, from Saracen Bay you can walk to the following: 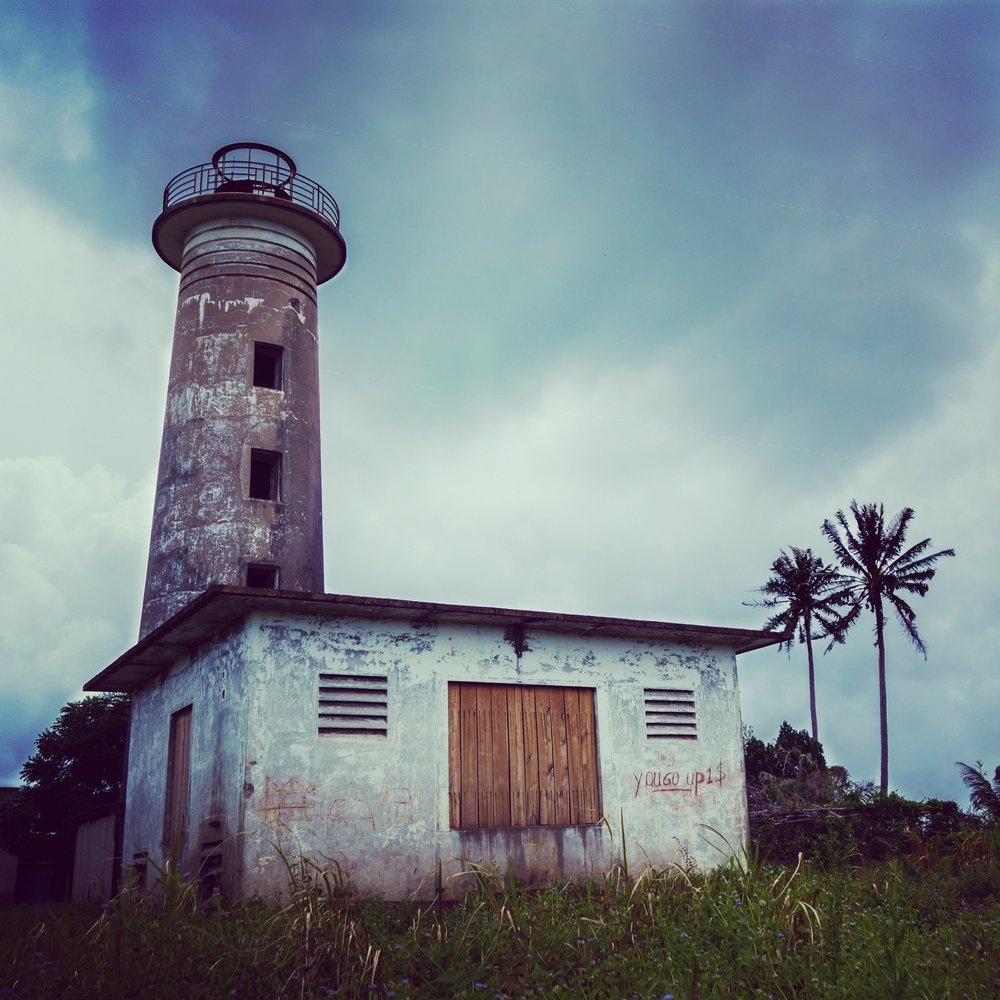 This path begins on the far south of the beach and is the second longest path which takes about two hours, depending on where you start from. You can also go up into the lighthouse if you pay the guy living there a dollar which is absolutely worth it. You will have a spectacular view over almost the whole island. 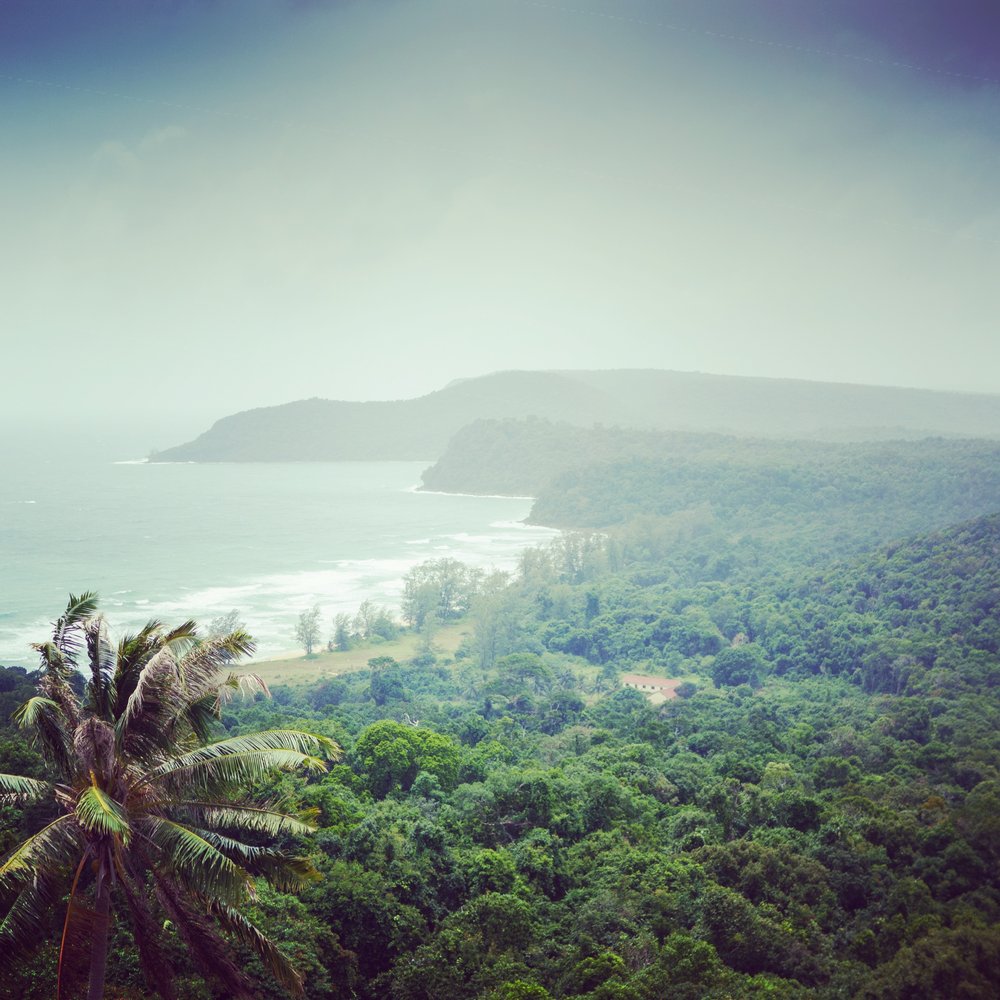 View over Koh Rong Samloem from the lighthouse

On the way to and from the lighthouse, there is another kilometer long path that leads to an old army base. It's nothing special and has the dirtiest beach on the island but still, if you're close to the lighthouse, why not go and have a look. Oh and I should warn you about the dogs there, they're quite aggressive. I was chased by one of them and only got away because I used some empty glass bottles on the beach to throw at him! 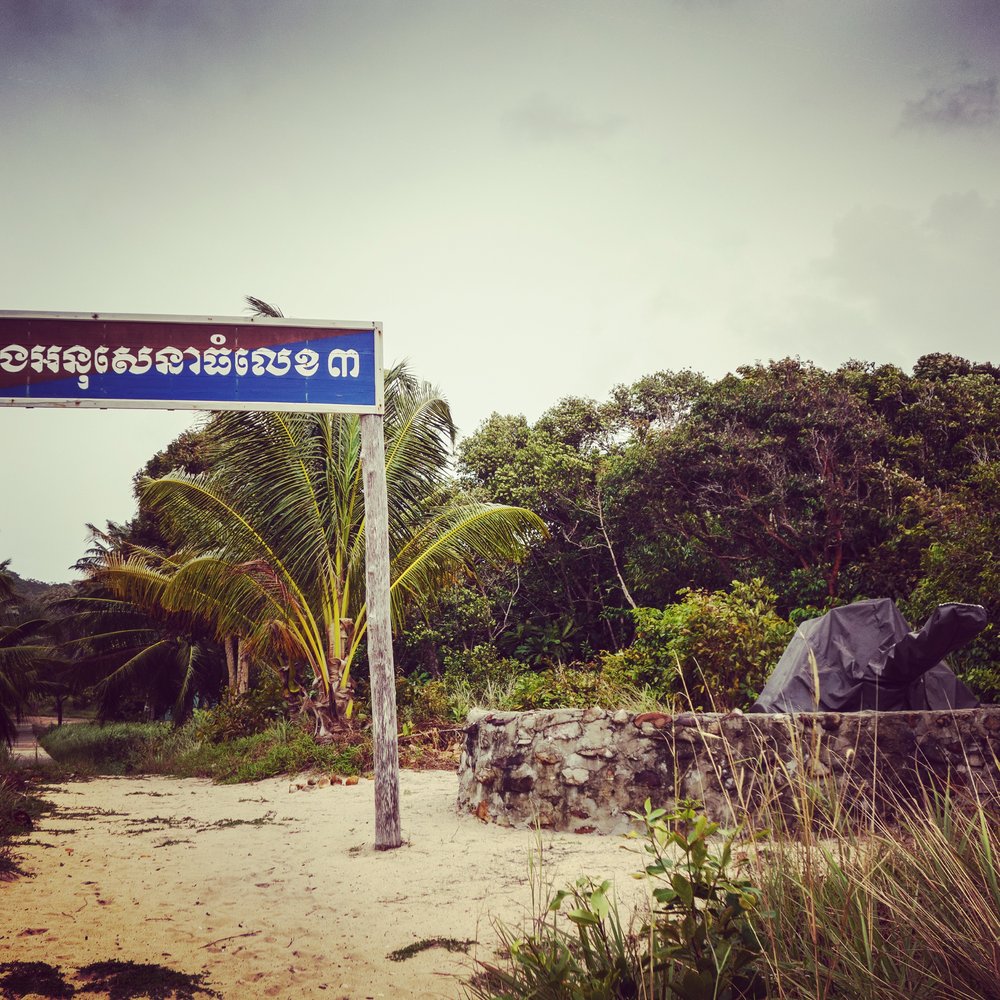 The army base, with cannons and all 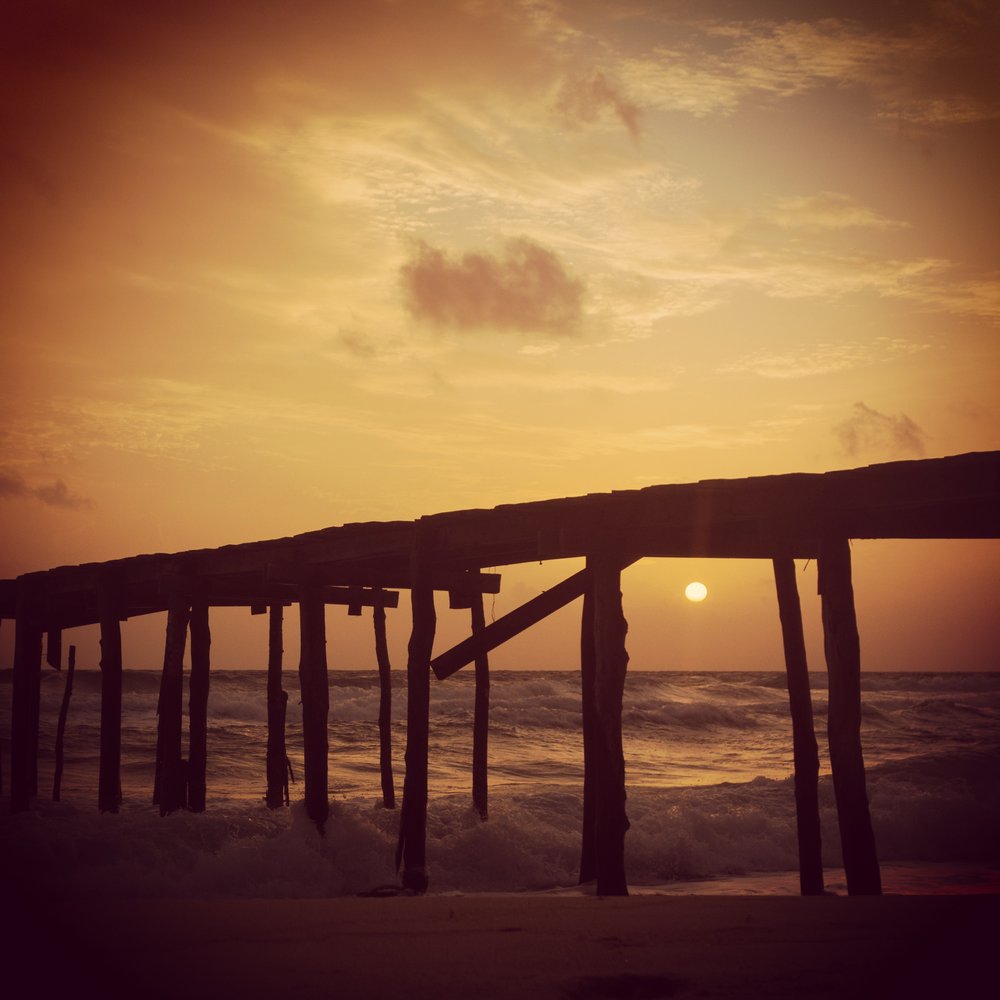 This path starts from The Beach Resort and is only about a twenty minute walk across the island. There are some resorts and bars on this side of the island, but the main attraction is [spoiler alert!] the sunset. It is a beautiful spot with the ocean going wild, golden sand and a creaky old jetty. You won't regret going there.
A word of advice: Bring a flashlight. It seems logical, but when you walk back from watching the sunset, it will be dark. In the jungle. On a very small trail. 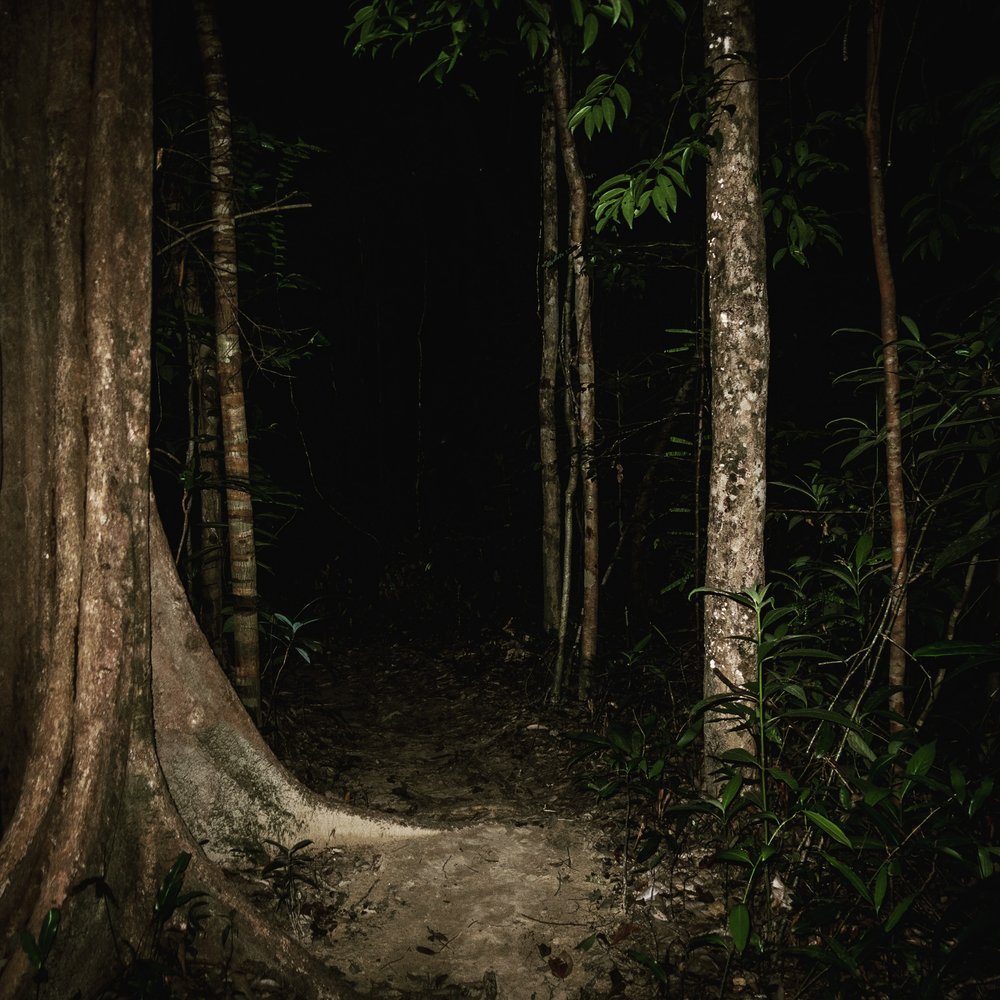 The path back from Sunset Beach at night

- Lazy Beach.
This is on the same side as the Sunset Beach and is supposed to be really beautiful. Some say that it's only open for Lazy Beach Resort guests but I'm sure you can go there anyway.

- M'Pai Bay.
This is the fishing village up in the north of the island. I tried to walk there and failed completely. It is supposed to be the longest path, but I only came as far as to the next bay. On the upside, I saw a lot of butterflies on this path. During my time on the island, I did some investigation and no one here actually walked the whole way there by foot, so it might be a myth. If you go there, please let me know because I'm curious how to do it.

- The waterfall.
There are a few waterfalls around, but this is the easiest to get to. Walk to the very north of Saracen Bay to Freedom Bungalows. Behind you will find the path up to the waterfall.

It's a magical moment when you go into the water at night and it gets this blue glow around you from the fluorescent plancton. I wish I could show you a photo, but I was busy being in a fairytale. Don't skip out on this one!

Without a doubt, Koh Rong Samloem is the one spot in Cambodia that made me the happiest and peaceful exploring this country. It has some very nice beaches, beautiful sunsets, little tourism (compared to its big brother, Koh Rong), lovely trekking and zero traffic. That said, it's not without flaws so just to set the expectations right, I'll let you in on some of the less nice things here.

Cambodia is by far the filthiest country I have visited. There's trash everywhere and Koh Rong Samloem is not an exception. But I would like to point out that this island is actually one of the cleaner places, probably because it's fairly unknown and that the only permanent community is the small fishing village in M'Pai Bay. The resorts on the main beach in Saracen Bay do a pretty good job keeping the waste away from the beach, but the constant construction of new bungalows makes that job harder. There are some spots, especially in the south end, that I would recommend keeping your shoes on, but in general it's not too bad. Unfortunately, the same can't be said on the west side of the island, though. If you don't want to step onto a broken bottle or get entangled in plastic bags here, the safest bet would be to go to Lazy Beach. 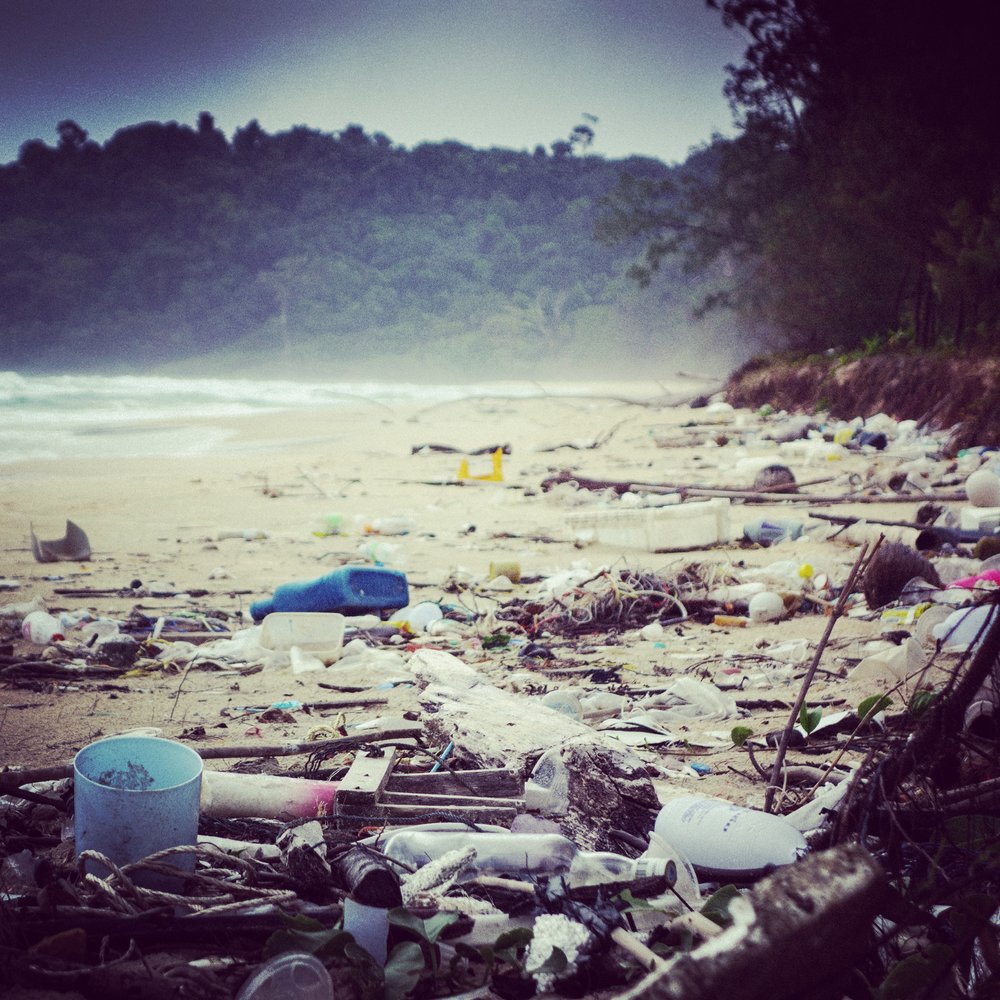 Imagine this beach without the trash

While trekking through the jungle, be a little bit careful not stepping on the millipedes. There's a lot of them, especially on the way to the lighthouse, and even though they're not dangerous, it can be quite painful if you get bitten (or stung or whatever they do, the little buggers).

Worse are the sandflies. I have never been bitten as much as here in Koh Rong Samloem and even during the day they are ferocious, so remember to bring heaps of repellent (which I didn't, and no there's still no shops around)! There's also quite a lot of mosquitos here. 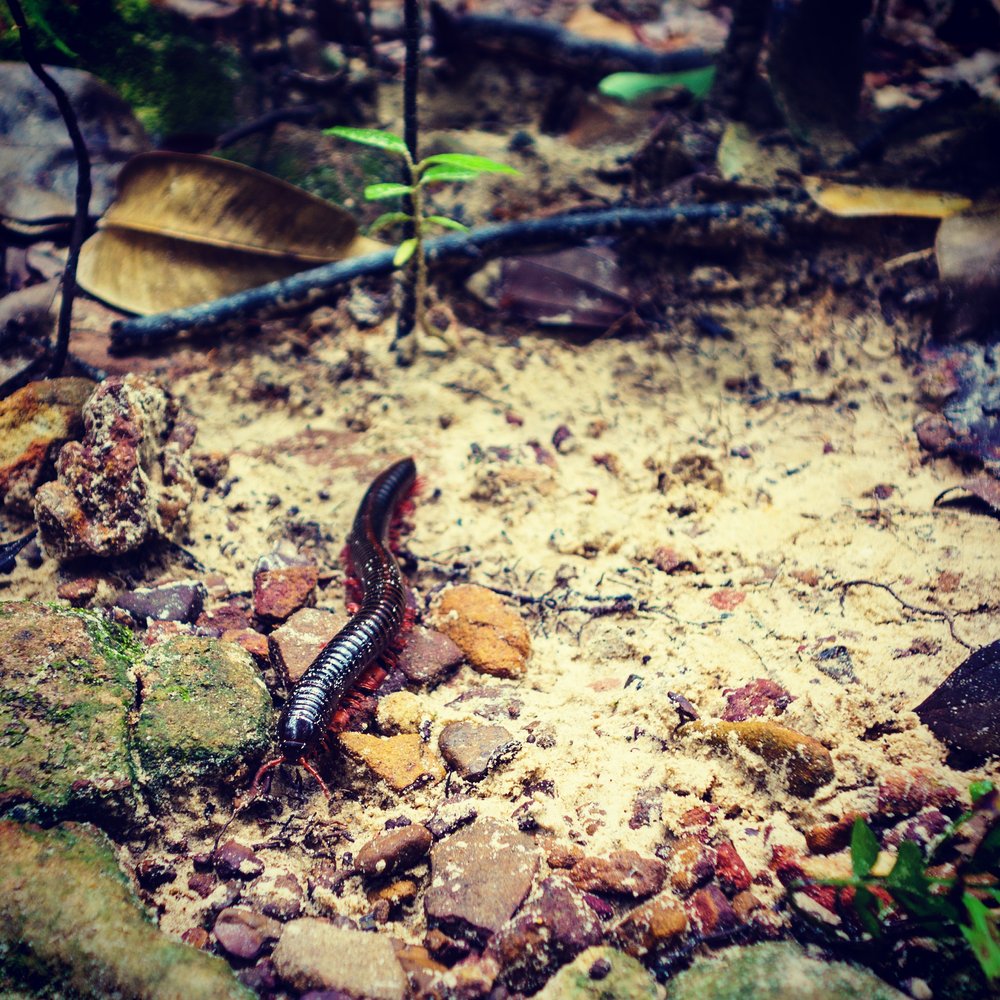 Millipedes are everywhere in the jungle. They can be up to fifteen centimeters, so be careful where you step

It's very expensive in Koh Rong Samloem compared to the mainland Cambodia. Expect everything to cost at least the double, so bring cash accordingly (I only had about $10 per day to spend, which meant that I only could afford breakfast, dinner and one bottle of water per day). I was fortunate to be here during the low season so I was able to negotiate the price for a private bungalow down to $10 at Rumi, a nice place run by Turks (sidenote: If you go there, make sure to try their Borek, it's delicious!). If you want accommodation for less, there are a couple of dorms spread out between $5 and $8. Since there are no stores on the island, you can't buy cheap snacks or fruit here to keep your budget down.

Internet (or the lack of)

Cambodia is not famous for its fast, widespread internet so it wasn't a surprise that I couldn't get connected on this island. You have a couple of options: Go to The Beach Resort, they have some sort of wifi there, but it's painfully slow. The other way is to bring a sim card from Smart or Metfone with a data plan. I tried both, but soon realized that it's only 2G at its best and when the wind blows in the right direction. Which is mostly...never. But if you're lucky, you will at least be able to send a message or two to let people know you're still alive.

Getting there and back

This is quite straightforward. Most hotels and hostels offer tickets from Sihanoukville to the islands. I went with Speed Ferry Cambodia, a company that started the first resorts in the islands. Sometimes the sea can be quite rough, so don't be surprised if you have to wait an hour or two before the boat arrives. You will get picked up at your accommodation in Sihanoukville by bus, van or truck and driven to the pier. The ferry takes about two hours to get there and is about $20 for an open return ticket.

When you're done playing Robinson Crusoe, confirm your ticket one day in advance to be sure there's space enough on the ferry. With Speed Ferry Cambodia, there are two departures, one in the morning and one in the afternoon. There might be a third one in the middle of the day, but it's almost never available.
Once arriving in Sihanoukville, there's trucks waiting. There's not room for everyone, so if you don't want to grab a tuk tuk from the pier, hurry up and get a seat after getting your bags. It wasn't quite clear where these trucks go, but the one I went with stopped near the Golden Lions roundabout and from there I had to take a moto to my hostel.

Koh Rong Samloem is one of my favorite places in Cambodia and is well worth a visit. It should definitely be on your list of things to see next time you're in Cambodia if you want to get away and recharge for a while.

Have you been to Koh Rong Samloem? Did I miss something compared to your experience? Share your thoughts in the comments!